Success at the Decanter competition is not a coincidence, but a continuation of the journey

Platinum medal and 97 points for Riesling Noble rot, gold and 95 points for Riesling 2017 VOC, and 90 points and silver for Riesling 2018 VOC. All this was added by an additional two bronzes for the cuvée created in the barrel. This year's excellent result of Sonberk winery from the Decanter World Wine Awards. What does it mean? And what can be expected from it? Dáša Fialová, Sonberk's sales director, explains it in an interview.

What follows immediately after such success?

Our great joy. And colleagues also write and congratulate us, so that makes us happy. It's nice that if something like this works out, we wish each other all the best in Moravia. I remember that when Jara Gala got 98 points for his Welschriesling, we were very happy for him in Sonberk too. The shopping storm on the e-shop usually starts with a delay of a few days.

Why is the Decanter such a unique competition?

It is the competition with the biggest number of samples. They are from all over the world. For example, the recently held Concours Mondial de Bruxelles in Brno is also large, but there were 8.5 thousand samples this year, while in London, there were 16.5 thousand samples on the Decanter. Besides, London is the largest wine market.

Does the significant number of samples affect the quality of the evaluation?

No, the organizers have set everything perfectly over the years. There were already up to 20,000 samples. The competition is long-term. It is not the case that the jurors meet somewhere for three or four days. They evaluate for almost a whole month, and they are mostly holders of the Master of Wine title. It works in such a way that they first score the wines in the first round, then the adepts for the gold medal are tasted again, and then evaluators pull out the platinum ones and those who receive the Best in Show award.

How is the wine selected for the competition in Sonberk?

For us, the important thing is the opportunity to go through the evaluation itself, that we will get into the hands of such quality evaluators. Every year we send, for example, eight wines, mainly Rieslings, Pálava and cuvées, current vintages, and even the older ones, when they develop interestingly.

Yes, mainly because of the international jury. Members of the jury are experts who have literally "drunk" the whole world. When you get 86 points on the Decanter, it means a delicious wine of a world character. And if it's anything that starts with nine, it's great glory. It's great that in the last five years, there has always been a lot of Moravian wine in the rankings - our Pálava had 95 points in 2017, Jara Gala's Welschrieling later even got 98 points, and also Zámecké vinařství Bzenec, or our neighbours from Gotberg did well. It proves that we can make exceptional wines in Moravia.

How does it feel to send Moravian Rieslings to the competition of the Austrian and German ones?

There is a bit of nervousness. We never know how the wines will fit because we don't have conditions like producers from the Mosel region or the Wachau. However, we know from the experts that they like our Rieslings, so we hope they will also be delicious for the top commission. In general, we are lucky to have a northern area where grapes are grown, which gives the wines high fruitiness and good acidity.

This year's success is a confirmation of a long-term trend. When did it start?

We achieved our first success in 2010; our Riesling 2008 was honoured. At that time, we thought that we could hardly repeat something like this - in the old rating system, we won the title for the best white wine in Central and Eastern Europe. Then the year 2017 came, when it was no longer just a regional award, but with the dry Pálava 2015, we became champions for the whole world and received an award for the best dry aromatic wine in the world. And a year later, our Pálava straw wine received 96 points and a gold medal. Since then, we collect 90-point ratings every year, but we also have a platinum medal for the sweet Riesling. This year we have retaken a step. Ninety-seven points and a platinum medal for the Riesling Noble Rot is the most we've ever won. At the same time, we are perhaps a little happier with the double success of Rieslings - gold and especially 95 points for the 2017 vintage and 90 points for the 2018 vintage. Riesling is a crucial wine for us which we most care about.

What follows such success?

It is also reflected commercially. We already have a history in London, they know us there, we have a great importer Ellis Wines. Years ago, they started with the Pálava, straw wine, then, thanks to our success on the Decanter, they moved their way to our dry. When we sent them samples of Riesling last year, they also liked it, so today, the ratio of varieties is changing. Specifically, this year. After the Decanter's success, the next day, we had an order from London for the Riesling 2017 palette and the Riesling Noble Rot. Ellis Wines supplies our wine Hedonism Spirit, which is probably the most extensive wine shop in Britain, and all three of our wines are on the menu of their Michelin-starred restaurant Hide. 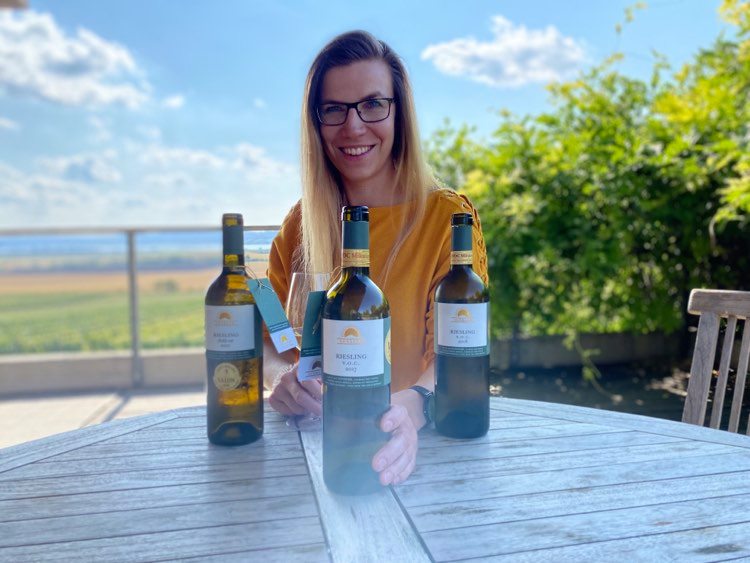